According to local Maori legend Ōtanewainuku is a chiefly mountain.

There was once a hill with no name who lived on the edge of the Hautere forest. This nameless was a pononga (slave) to the great chiefly mountain, Ōtanewainuku. To the southwest was the shapely form of Pūwhenua, a beautiful hill, clothed in all the fine greens of the ferns and shrubs and trees of the forest of Tāne. The nameless one was desperately in love with Puwhenua, however her heart already belonged to Ōtanewainuku.

There seemed to be no hope for the lowly slave. In despair the nameless one decided to end it all by drowning himself in the ocean, Te Moananui a Kiwa. Calling on the patupaiarehe (creatures of the mist), the pononga asked them to plait the ropes with their magic and then haul him down towards the ocean.

Chanting their song they began to haul the nameless one slowly towards the water, gouging out the valley where the river Waimapu now flows. They followed the channel past Hairini, past Maungatapu and Matapihi and finally past Te Papa to the water's edge.

By this time, it was very close to day break. The sun rose fixing the nameless one to that place. Being people of the night the patupaiarehe fled back to the shady depths of the Hautere forests, before the light of the sun descended upon them.

The patupaiarehe gave the name Mauao to this mountain which marks the entrance of Tauranga Moana. Mauao means caught by the morning sun. Mauao is also known as Mt Maunganui. 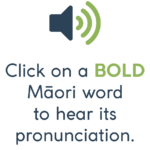 The name Ōtanewainuku means “the many waters that spring forth from the domain of Tāne - overseer of the forest." Another definition is "the mountain of the parting waters, where the clouds meet the land, and the rain leaves the sky."

The mountain is the headwater of many streams that initially flow in all directions.

Those to the south and east mostly go underground within a short distance of the base of the mountain, and flow to the Mangatohe Stream, Te Reranga, Koakoanui and Mangatoi Streams, into the Waiari Stream, then the Kaituna River, ending at Maketu Estuary and eventually the Pacific Ocean at Maketu.

To the North is the Whataroa Stream, which provides our beautiful waterfall off the Rimu loop Track flows into the Raparapahoe Stream and then the Kaituna River and the Pacific Ocean at Maketu.

Those to the West flow to Te Awanui (Tauranga Harbour) and stay mostly on the surface as the Tautau and Waiarohe Streams. Both streams feed the large reservoirs in Oropi and Pyes Pa which supply Tauranga’s water.

Ōtanewainuku has never been logged so visitors are treated to some splendid examples of native flora including giant rimu. The forest is home to a variety of native birds – the inquisitive native robins are generally quick to check out walkers. Dogs are not permitted in the reserve due to the danger they pose to kiwi.

There is a shelter, picnic area, information panels and toilets opposite the car park. Two walking tracks start from the picnic area: the tracks are well maintained.